Skin is the largest organ of the human body. It plays a crucial role in protecting the transition for a newborn from the womb into the postpartum world. Skin is the first line of defense against a dry, harsh, and pathogen- loaded environment. It plays an important role in thermoregulation and in maintaining fluid balance; perturbations may require intervention. The skin of a term newborn baby is not considered to be mature until 3 weeks of age and a preterm baby’s skin takes even longer to mature [1]. During the first few weeks of life, a neonate’s skin is more susceptible to pressure ulcers (PU), also known as bed sores. The baby’s skin is also affected due to implications requiring interventions such as thermoregulation, e.g., hypothermia, and excessive dehydration.

Until relatively recently, when compared to adults, pediatric and neonatal populations were not considered at risk of developing PU due to the relative ease of repositioning lightweight patients by caregivers. If a newborn developed a PU, the cause was attributed to being hospitalized [2].

Most prevention and treatment protocols for PU in pediatric populations are extrapolated from adult practice. Several recommendations have been adopted such as high-specification foam mattresses, air mattresses, sheepskin, gel mattresses and other alternatives [4] to mitigate the incidence and prevalence of PU. This article will explore more closely the positioning of neonates and the use of the NeoLight GelMat, a cost- effective product designed to support healthy skin in the newborn population.

Definition: In 2014, the National Pressure Ulcer Advisory Panel (NPUAP), the European Pressure Ulcer Advisory Panel (EPUAP), and the Pan Pacific Pressure Injury Alliance (PPPIA) defined a pressure ulcer as “a localized injury to the skin and/or underlying tissue usually over a bony prominence, because of pressure, or pressure in combination with shear. A number of contributing or confounding factors are also associated with pressure ulcers; the significance of these factors is yet to be elucidated” [5].

Causation and Categories of PU: The developmental mechanism of PU is based on prolonged occlusion of the blood capillaries obstructing blood supply to the tissue. The magnitude and duration of the applied pressure determine the severity of injury [6,7]. As stated above, four

(4) Stages have been described and agreed upon and drawings of each Stage are shown in Figure 2. However, despite risk factors for adult PU, a consensus has not been achieved for neonatal PU risk factors.

Stage 1: a non-blanching erythema is produced on intact skin;

Stage 2: partial loss of skin thickness or blisters may appear;

There are 2 additional Stages:

Pervasiveness of PU: Some of the risk factors for PU in neonates reported in the United Kingdom National Institute for Health and Care Excellence (NICE) guidelines include reduced mobility, acute/chronic illness, extremes of age, duration of pressure, amount of pressure, shear on the skin, moisture, diminished perfusion, infection, and malnutrition [4]. Therefore PU prevention in neonates focuses on skin care (hygiene and hydration), pressure management, and adequate nutrition. However, a fundamental part is the assessment of PU by a valuation scale. Neonatal dermatology experts agree that prevention lies in early risk identification, and risk assessment scales for PU are an excellent tool for this purpose. There are 14 validated, published, pediatric, risk assessment scales [5] which were originally derived from scales designed for pediatric populations. Amongst them, 4 are used for the neonatal population that includes Braden Q, Glamorgan Scale, Starkid, and Neonatal Skin Risk Assessment Scale (NSRAS) [26-30]. These scales have good sensitivity and specificity values, perform well in identifying a patient at risk of PU and propose prevention strategies. However, these scales are adapted from adult scales. More comprehensive scales suitable for neonates of different gestational ages and corrected ages are needed.

The pervasiveness of PU in a population – neonates in this case – is usually reported using incidence and prevalence rates. Incidence is defined as the number of new cases of PU commencing during a specified period in a given population; Prevalence is the number of cases with PU at a given time. A delimited literature review has revealed that NICU incidence rates vary from 3.70% to 21.60% with a prevalence of 23% [12-17].

The metrics for PU reported in the survey [18] conducted by the Minnesota Department of Health and in the national pediatric survey [9] conducted by Texas Children’s Hospital offer insights into the seriousness of PU in the neonatal population. Children less than 3 months of age have the highest prevalence (~ 25%), eclipsing the second highest by a significant margin (Figure 3). Wherein, Stage I PU were reported as the most common Stage and were observed within the first 2 days of admission. Please see Figure 4 for the complete distribution of PU in the pediatric population by Stages. Additionally, nearly 66% of pediatric patients were reported acquiring Stage 3 and Stage 4 PU in the hospital facility (see Figure 7).

Impact of PU on a Hospital

In the 21st century, a hospital-acquired Stage 3 or Stage 4 PU is classified as a “Never Event” by the Center of Medicare and Medicaid Services (CMS). Never Events are serious and costly errors that occur in the provision of health care services that can be avoided by using evidence-based care [3]. Medicare, Medicaid, and some private insurers will not reimburse physicians or facilities when one of their patients suffers a Never Event. When the Minnesota Department of Health reported on 312 Never Events, PU had the highest incidence (39%)18 (Refer to Figure 6). The cost to heal the mildest PU can be as high as $9004.

To better understand the monetary burden, several studies have quantified the direct impact of PU on a hospital by studying the increased hospital costs and lengths of stay (LOS). One study estimated that a hospital spends an additional baseline amount of $900 for a Stage 1 PU. This figure rises to $17,500 in the case of Stage 4 PU4. In another study conducted by the Agency for Healthcare Research and Quality (AHRQ), 431,524 discharges from 38 different pediatric hospitals were investigated. The study reports a statistically significant increase in the average LOS of 8.07 days (Standard Deviation - 1.73 days) and an increase in the average treatment cost of $59,225 (Standard Deviation - $17,581) for patients with severe PU. Even though these numbers are indicative of the entire pediatric population and not just the neonatal subset (12%), conservative estimates from the reported figures indicate that the increase in LOS and hospital costs would be approximately 4.63 days and $24,063, respectively. It is evident that hospital PU can benefit from utilizing cost-effective solutions like pressure relieving devices [30].

In addition to causing pain and dermal damage, PU can cause life-threating infections [19], disfigurement, and impact overall body image [20]. PU are most commonly near bony prominences with neonatal PU are focused near the occiput, heels, elbows, ears, and coccyx – areas that touch the bed surface (Figure 8). This survey was conducted in 2003 gives an insight into the distribution of PU frequency in a neonate, and a more recent survey in 2017 confirms those numbers [10]. The best-known method to prevent and lessen the impact of PU is by using pressure-relieving devices. These devices work by spreading the weight of the body over a larger area. For example, if a neonate laid on a firm mattress, approximately two square centimeters area under the head would rest on the mattress, whereas if the mattress was softer, it would conform to the shape of the head offering a larger contact area to relieve localized pressure. These pressure-relieving devices can be broadly classified as low-tech devices or high- tech devices [25]. Low-tech devices provide a conforming surface to distribute weight over a larger area. Examples include standard foam mattresses and air- filled mattresses. High-tech devices are like low-tech devices, but they are more dynamic in nature. Some examples of high-tech devices include alternating- pressure mattresses, which periodically inflate and deflate at various anatomical sites to relieve pressure and turning beds that aid manual repositioning of the patient by motor-driven turning and tilting.

For visualization purposes, some of the depicted regions are a conglomeration PU incidence in the local region.

Guidance by NICE [4] and The Association of Women’s Health, Obstetric and Neonatal Nurses (AWOHNN) [21] recommends the use of high specification foam mattresses, water/air/gel mattresses, and sheepskins to relieve pressure on areas susceptible to PU. Studies validated usage and relative advantages of their recommendations over standard hospital mattresses. In one study that surveyed 215 NICUs, 67% of the NICUs used sheepskins for preventive neonatal skin protection from PU and 77% use the same to treat once skin breakdown has occurred [22]. Another study reported that gel mattresses were effective in relieving occipital pressure and concomitantly reduced PU and scarring in neonates [23]. Evidence suggests that gel surfaces are equally effective as sheepskin in preventing PU11 and might reduce head-molding over time for smaller infants who are hospitalized longer [24]. The fact that gel solutions can be customized and have a price point comparative with sheepskins make them an effective solution to prevent PU in newborns.

GelMat: A Solution for PU in Neonates

The NeoLight GelMat addresses one of the recommended methods to prevent PU [4,5,25] i.e., gel mattresses. Unlike solutions currently available, such as foam mattresses which have been designed for adults and do not cater to the requirements of a neonate, the GelMat has been designed by working closely with NICUs.

The GelMat is filled with a unique polymer material that is extremely soft. Its softness can be vicariously imagined as a material that is 3 times softer than a gummy bear. At this softness, the material almost flows like a gel under a load and returns to its original shape after the load is removed. As a result, unlike any other type of mattress that undergoes global deformation, the GelMat is softer and can locally form to the shape of the baby’s bony prominences, e.g., elbows, occiput, and heels. This helps to distribute the pressure uniformly by increasing the area of the GelMat contact around the bony prominences and as a result, reducing the incidence of PU. Additionally, since the GelMat is made up of a polymeric material, it does not alter its temperature rapidly when exposed to a change in environmental temperature during patient transport or other patient management activities.

Cleaning and disinfection are routine activities in hospitals and especially in a NICU. Over a short time, mattresses and sheepskins, because of their texture, trap dead skin cells. The only way to clean them is to machine wash them. GelMat is designed to be nurse friendly, biocompatible, and allow cleaning with common disinfectants such as CaviWipes™. Also, the GelMat surface is smooth and designed to offer less shearing for the patient’s skin. A mattress can be cleaned within 5 minutes, potentially allowing the hospital to maintain fewer mattresses in inventory.

In addition to patient comfort and skin preservation, teaching families about Safe to Sleep® practices and demonstrating acceptable positioning is done while the newborn is hospitalized. Following these recommendations, the GelMat is designed to be thick enough to redistribute pressure over bony prominences, while being thin enough to completely conform to the surface of the body i.e., prevent a sinking effect. This allows the GelMat to hold a firm shape while alleviating pressure points.

Only a small number of products are appropriate to consider for use in the prevention/treatment of PU. Unfortunately, many of the solutions available are designed for adults, exposing neonates to the risk of systemic absorption, toxicity, hypersensitivity, and possible adverse reactions.

Thank you! Your submission has been received! 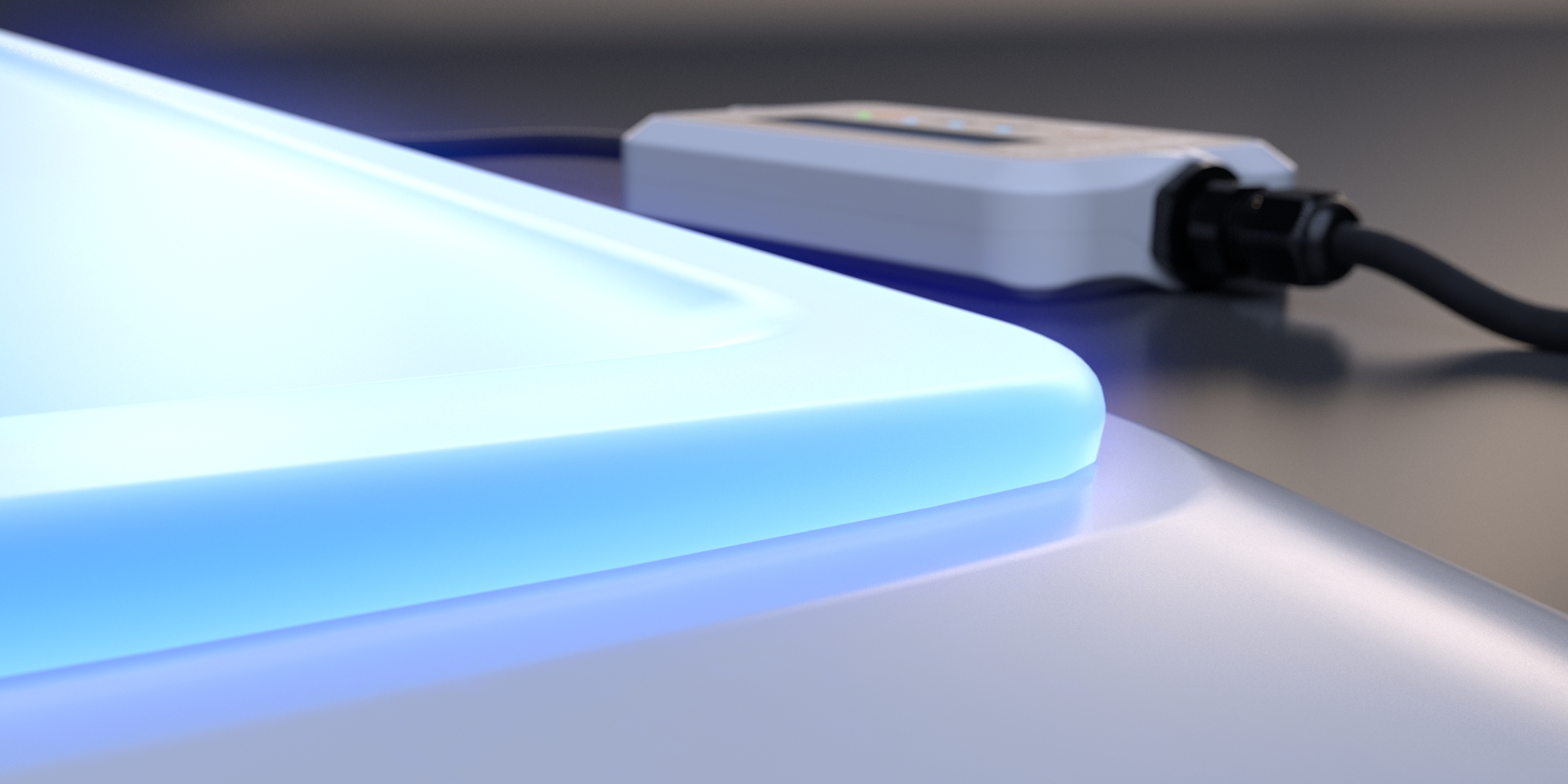 Oops! Something went wrong while submitting the form.
+